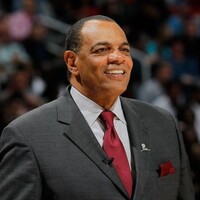 Lionel Hollins net worth and salary: Lionel Hollins is an American professional basketball coach and former professional basketball player who has a net worth of $8 million. Lionel Hollins was born in Arkansas City, Kansas in October 1953. Hollins was a point guard who played at Rancho High School, Dixie Junior College, and Arizona State University. He was twice named to the First-team All-WAC. Hollins was drafted #6 by the Portland Trail Blazers in the 1975 NBA Draft. He played for Portland from 1975 to 1980 and then for the Philadelphia 76ers from 1980 to 1982. Hollins played for the San Diego Clippers from 1982 to 1983, the Detroit Pistons from 1983 to 1984, and the Houston Rockets from 1984 to 1985. During his playing career he won an NBA Championship with the Blazers and was an NBA All-Star in 1978. Hollins was part of the NBA All-Rookie First Team in 1976, NBA All-Defensive First Team in 1978, and NBA All-Defensive Second Team in 1979. His #14 jersey was retired by the Trail Blazers. He started his coaching career as an assistant for Arizona State from 1985 to 1988 and then became an assistant coach for the Phoenix Suns from 1988 to 1995. Hollins was an assistant coach for the Vancouver Grizzlies from 1995 to 1999 and served as their interim head coach from 1999 to 2000. From 2000 to 2001 he coached the Las Vegas Silver Bandits of the IBL and then the Saint Louis Skyhawks of USBL in 2002. From 2002 to 2007 he rejoined the now Memphis Grizzlies and an assistant and was interim head coach again in 2004. He worked as an assistant for the Milwaukee Bucks from 2008 to 2009 before finally becoming head coach of the Grizzlies from 2009 to 2013. In 2014 Hollins became head coach of Brooklyn Nets.