Les Miles Net Worth: Les Miles is an American college football coach and former player who has a net worth of $12 million. Born Leslie Edwin Miles in 1953 in Elyria, Ohio, Les Miles played along the offensive line for the University of Michigan Wolverines in 1974 and 1975. Miles got his first taste of coaching experience at Michigan as a graduate assistant from 1980 until 1981.

He later coached the offensive line at Colorado from 1982 until 1986 before returning to Michigan to take the same role. In 1995, he left Ann Arbor to work as the offensive coordinator at Oklahoma State, where he stayed from until 1997 before the Dallas Cowboys hired him to coach their tight ends. In 2001, Miles was hired as the head coach at Oklahoma State. Four years later, he became the head coach at Louisiana State University, and has held the position ever since. Miles has a 130-49 record as a head coach midway through the 2014 season, and is 7-5 all-time in bowl games. Miles won the only national championship of his career so far in 2007. He won two SEC championships and three SEC Western Division championships. He earned Coach of the Year honors from a variety of outlets, including the Associated Press and Home Depot, in 2011. Miles has four children with his wife. 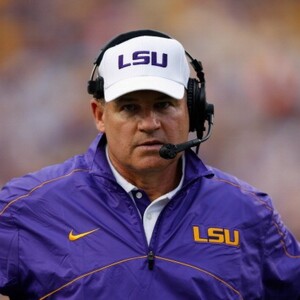