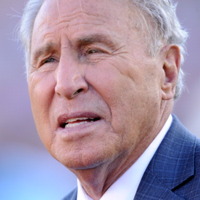 Lee Corso net worth: Lee Corso is an American sports broadcaster who has a net worth of $12 million. Lee Corso earned his net worth over many years in the sports television industry. In addition to his career in television, Corso previously accumulated his net worth in a career as a college football coach, and in the off season he serves as Director of Business Development for Dixon Ticonderoga, a pencil company based in Florida. Corso's career in football began as a college student at Florida State University, where he made a name for himself as a defensive player. He set an impressive and long standing record with the team – the record for most career interceptions at 14. In addition to his playing with FSU, Corso played as quarterback for the South in the annual Blue-Gray Football Classic. After graduation from Florida State, Corso, bachelor's degree in physical education in hand, started a career in coaching, first working at the University of Maryland. After a modestly successful career coaching college football, Corso coached his first professional team in the USFL Orlando Renegades. As a broadcaster, Corso is known for his comic hijinx, including wearing the mascot headgear of the team he predicts will win a given game, and his catchphrase "not so fast, my friend."