Kyle Shanahan net worth and salary: Kyle Shanahan is an American professional football coach who has a net worth of $4 million. In 2017 he signed a six-year $21 million contract with the 49ers. Therefore, Kyle Shanahan's annual salary $3.5 million. His contract contains milestone bonuses that could result in several million more dollars over life of the deal.

Kyle Shanahan was born in Minneapolis, Minnesota in December 1979. He is the son of former NFL head coach Mike Shanahan. Kyle played wide receiver at the University of Texas at Austin.

As a coach Kyle Shanahan started out as a graduate assistant at UCLA in 2003. He was an offensive quality control coach for the NFL's Tampa Bay Buccaneers from 2004 to 2005. Shanahan was wide receivers coach for the Houston Texans in 2005 and then was the team's quarterbacks coach in 2007 and offensive coordinator from 2008 to 2009. He was the offensive coordinator for the Washington Redskins from 2010 to 2013 and the offensive coordinator for the Cleveland Browns in 2014 and for the Atlanta Falcons from 2015 to 2016. Kyle Shanahan became the head coach of the San Francisco 49ers in 2017. He was named the AP NFL Assistant Coach of the Year in 2016 and won the NFC West Championship in 2019. 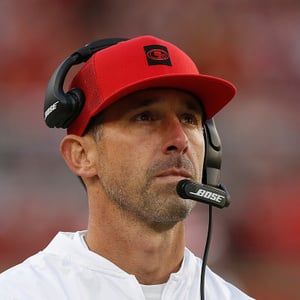