Kevin Ollie net worth and salary: Kevin Ollie is an American basketball coach who has a net worth of $20 million. From 2012-2018 Kevin was the head coach of the University of Connecticut men's basketball team. He is also former Huskie who upon graduation, went on to play in the NBA for several years before returning to the Huskies as an assistant coach in 2010.

Ollie played for twelve NBA franchises in thirteen seasons from 1997 to 2010. In 2012, Ollie was named the head coach at Connecticut, replacing longtime hall of fame coach, Jim Calhoun, who he played under during his college career. Ollie served as an assistant coach under Calhoun during his final two seasons, and on December 29, 2012 signed a five-year agreement with UConn. The Huskies ended their first season under Ollie 20-10 overall and eighth in the Big East play. In only his second season as head coach, and only his fourth year in the profession since retiring from the NBA, Ollie has already established himself as one of the rising young coaches in college basketball. Kevin Ollie was born on December 27, 1972 and raised in Los Angeles. He resides in Glastonbury with his wife, Stephanie, who is also a graduate of UConn, and their two children: son, Jalen, and daughter, Cheyanne. Ollie is a devout Christian and has spoken about the importance of his faith in his every day life. 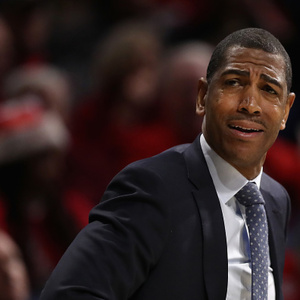