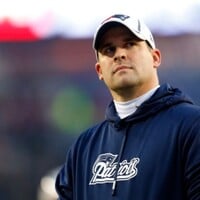 Josh McDaniels net worth and salary: Josh McDaniels is an American professional football coach who has a net worth of $6 million. Josh McDaniels was born in Barberton, Ohio in April 1976. He played at Canton McKinley High School and played wide receiver for John Carroll University. McDaniels started his coaching career as a Graduate Assistant at Michigan State University from 1999 to 2000. In 2001 he joined the NFL's New England Patriots as a personnel assistant. McDaniels became the Patriots' Defensive Coaching Assistant from 2002 to 2003 and then served as the team's Quarterbacks Coach from 2004 to 2008. From 2006 to 2008 he also served as Offensive Coordinator for New England. McDaniels got his first head coaching job with the Denver Broncos from 2009 to 2010. In 2011 he was Offensive Coordinator for the St. Louis Rams and then returned to the Patriots as Offensive Assistant. Since 2012 McDaniels has served as Offensive Coordinator for the New England Patriots. At the time of his hiring he was the youngest head coach in the NFL at 33. McDaniels was involved in a videotaping controversy in 2007 and was fined $50,000 by the NFL.