What is Jon Gruden's Net Worth and Salary?

Jon Gruden is an American football coach and NFL analyst for ESPN (when he's not coaching). Jon Gruden has a net worth of $30 million. Gruden was head coach of the Oakland Raiders from 1998 to 2001. He was then head coach of Tampa Bay from 2002 to 2009. He was an ESPN commentator from 2009 until 2018 when he returned to the NFL as head coach of the Raiders. He stepped down from the Raiders in October 2021 amid a racist/homophobic email controversy.


As an ESPN commentator Gruden earned $6.5 million per year. In September 2015, it was revealed that Gruden is the highest paid personality on ESPN.

When Jon returned to the Raiders in 2018 as a head coach, he signed what was then the largest coaching contract in NFL history. The 10-year contract was worth a reported $100 million. It therefore paid $10 million per year. His highest NFL coaching salary prior to returning 2018 was the $4 million per year he earned from Tampa Bay.

Gruden stepped down from the Raiders in October 2021 after emails he sent were leaked to the media. The emails contained racist and homophobic comments. Gruden will reportedly not receive any of the $60 million remaining on his deal at the time of his resignation. It's unclear how much of his salary he had already earned in the 2021 season. 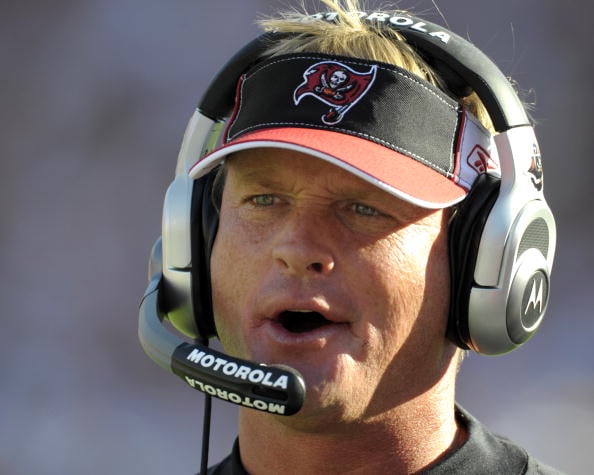 Jon Gruden was born August 17, 1963 in Sandusky, Ohio. At the University of Dayton, he was a three-year letter-man and backup quarterback for the Flyers. Gruden never saw much playing time, but the Flyers posted a 24-7 record during his three seasons at UD.

Gruden graduated with a degree in communications in 1985 and was later hired as a graduate assistant coach at the University of Tennessee during the 1985-1986 season. He spent two years as the quarterbacks coach at Southeast Missouri State. Gruden then moved to the University of the Pacific in 1989 as offensive assistant as the tight ends coach, where he coached Scott Lubow, who was second team All Conference.

In 1990, Gruden was a special assistant with the San Francisco 49ers under quarterback coach Mike Holmgren. In March 1991, Gruden became the wide receivers coach for the University of Pittsburgh under Paul Hackett. Between 1986 and 1997, Gruden served as an assistant and/or coach for the University of Tennessee, Southeast Missouri State, University of the Pacific, San Francisco 49ers, University of Pittsburgh, Green Bay Packers and Philadelphia Eagles. His first job as Head Coach was with the Oakland Raiders 1998-2001. In May 2009, Gruden was hired by ESPN to serve as a color analyst on its Monday Night Football telecasts, replacing Tony Kornheiser. In 2018 he was re-hired as head coach of the Raiders. 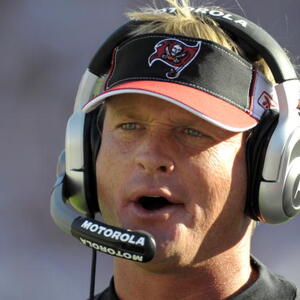