John Thompson net worth and Salary: John Thompson was an American college basketball coach who had a net worth of $5 million dollars. John Thompson died on August 30, 2020 at the age of 78. He was best-known for coaching the Georgetown men's basketball team for 27 seasons. He was the first African-American head coach to win a major college athletic championship when the Hoyas won the NCAA Tournament in 1984.

John Thompson was born in Washington, D.C. on September 2, 1941. He first rose to prominence as an excellent basketball player while at Archbishop Carroll High School. He graduated as the Top Scorer in the Washington Catholic Athletic Conference, and went on to a stand out college career at Providence College. He set multiple school records and was an All-American selection. The Boston Celtics drafted him in 1964. He quickly realized that coaching was his passion, and he shifted his focus, retiring from professional play in 1966. He first made a name for himself coaching St. Anthony High School from 1966 to 1972. He led the team to a 122-28 record.

John was then hired to coach for Georgetown University, and went on to win seven Coach of the Year Awards over nearly three decades with the team. He turned Georgetown into one of the best teams in college basketball and coached them to a 596-239 record, before retiring in 1996. While coaching for Georgetown, John coached dozens of future superstars including, notably, Allen Iverson, Alonzo Mourning and Patrick Ewing.

After retiring, Thompson worked for many years after coaching as a sports commentator.

Salary: Years after retiring as head coach, Thompson was still on Georgetown's payroll. According to the University's tax records, Thompson earned $405,000 per year in salary PLUS $26,000 in benefits to serve as a "presidential consultant for urban affairs". When asked about this payment, Georgetown officials in 2006 clarified that it was deferred compensation for his 27 seasons as coach. University president Jack DeGioia explained that "when John was our head men's basketball coach, we were never in a position that we were able to compensate him at the level of his peers. It was really his commitment to us. We came up with a structure that allowed us to spread the compensation over a long period of time." In the late 1980s and early 1990s, elite men's basketball coaches earned $200-$400,000 per year. It is not known how much less Thompson was earning at that time. His very last salary is known, however. In his very last season with Georgetown, 1998-1999,Thompson was paid $610,040 and $24,529 in deferred compensation. At that point, comparable basketball coaching peers were earning $800,000-$1 million.

In 2004 when his deferred salary was revealed, it was also revealed that this compensation made Thompson the second-highest paid employee of Georgetown, behind only President Jack DeGioia who earned $512,228.

As an interesting comparison, John's son John Thompson III likely earned exponentially more in salary coaching for the Hoyas for 13 seasons, than his father did in nearly 30. Thompson III's peak salary was $3.6 million. Thompson III was replaced by Patick Ewing – who was coached by Thompson II at Georgetown  – in 2017. Patrick earns $4 million per year to coach the Hoyas today. 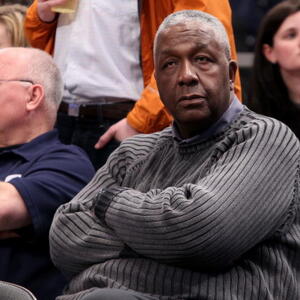