John Harbaugh net worth and salary: John Harbaugh is an American football coach who has a net worth of $16 million dollars and annual salary of $7 million. Born in Toledo, Ohio, John Harbaugh went on to play college football at the University of Miami, and then earned his Master's Degree at Western Michigan University.

He began his coaching career in the mid-80s, serving as an assistant coach at Western Michigan, then moving on to the University of Pittsburgh, Morehead State, the University of Cincinnati, and Indiana University. He made the move to the NFL in 1998, where he spent the next nine years as the special teams coordinator and defensive backs coach for the Philadelphia Eagles. In 2008, he was finally offered the coaching position that he had always wanted, becoming the Head Coach for the Baltimore Ravens. His first season with the Ravens was largely successful, and he has continued to lead the team to playoff berths each season. He coached the Ravens to the Superbowl in 2013, where his team will be facing the San Francisco 49ers, which are, coincidentally, coached by his brother Jim Harbaugh. 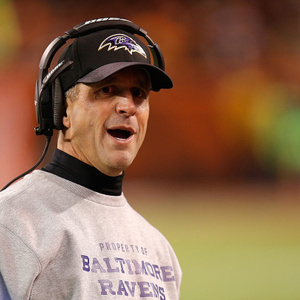