Jimbo Fisher Net Worth and salary: Jimbo Fisher is an American college football coach who has a net worth of $13 million. Jimbo Fisher was born in 1965 in Clarksburg, West Virginia. His college football playing career began at Salem from 1985 until 1986 before he transferred to Samford in 1987. He later played for the Chicago Bruisers, an old arena professional football team, as quarterback in 1988.

Fisher's coaching career started at Samford, where he was a graduate assistant who worked with the quarterbacks. He was promoted to offensive coordinator in 1991, and, two years later, landed the gig coaching quarterbacks at Auburn University. Fisher stayed with the Tigers until 1998 when he moved to Cincinnati to serve as the offensive coordinator and quarterback coach. In 2000, Fisher accepted the same position at Louisiana State University, which he held for six seasons before he left for Florida State University. In 2009, after three seasons as the Seminoles' offensive coordinator and quarterbacks coach, Fisher earned the first head coaching gig of his career with the same team. He has since amassed a 56-10 career win-loss record part way through the 2014 season, and is undefeated in bowl games. Fisher won one national championship with FSU in 2013. He is a two-time ACC Championship winner and won the Florida Cup in 2013. Fisher has two sons with his wife, Candi. One of his children is battling Fanconi anemia, and Fisher uses his high profile coaching career to raise awareness about the condition. Fisher has spoken about his dream of opening an organic beef jerky business once he leaves the sidelines. 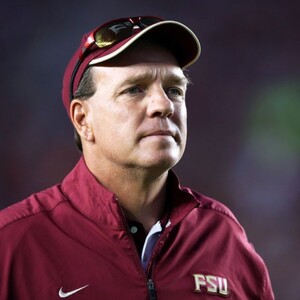