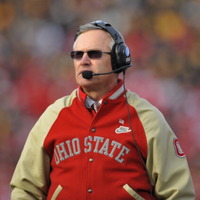 Jim Tressel net worth and salary: Jim Tressel is an American college football coach and school administrator who has a net worth of $18 million. Jim Tressel is currently the President of Youngstown State University. Jim Tressel earned the majority of his net worth when he served as the head football coach at Ohio State University from 2001 to 2011. He also spent time as a game day consultant for the Indianapolis Colts. He was born in Mentor, Ohio on December 5, 1962, and was inspired by his father Lee Tressel, who was a football coach at Mentor's high school. Jim's father Lee was hired by the Baldwin-Wallace College in Berea, Ohio as head football coach after Mentor's 34-game winning streak. As a result of hiring Lee Tressel, Baldwin-Wallace won the NCAA Division III National Championship in 1978. Jim Tressel himself was a quarterback at Baldwin–Wallace under his father's coaching. Eloise Tressel, Jim's mother worked at Baldwin–Wallace as the athletic historian. Jim Tressel earned the head coaching job at Ohio State, after he replaced John Cooper in the 2001 season.

During his coaching career at Ohio State, Jim led the team to three BCS National Championship Games, a national title in 2002, and six Big Ten Conference Championships. His prior 15 year career as head football coach at Youngstown, was also filled with accomplishments, his team won four NCAA Division I-AA Football Championships. Tressel was hired as a consultant by the Indianapolis Colts of the NFL in September, 2011, However he was suspended by the Colts until the 7th game of the season, because of his involvement in the NCAA violations that took place during his career at Ohio State. Tressel has been the recipient of several awards and honors including inductee into Baldwin-Wallace College Athletic Hall of Fame in 1975, the 2002 Eddie Robinson Coach of the Year, and the Columbus Dispatch Ohio College Football Coach of the Year in 2010.