Jim Mora Net Worth: Jim Mora is an American college football coach who has a net worth of $8 million. Jim Mora was born in Los Angeles, California, in 1961. He played college football as a linebacker and defensive back at the University of Washington from 1980 until 1984, and earned his Bachelor of Science degree from the school.

Mora's coaching career started at his alma mater, where he worked as a graduate assistant in 1984 before landing a role with the San Diego Chargers of the NFL. In 1992, the New Orleans Saints hired Mora as their defensive backs coach, and Mora joined his father, Jim Mora Sr., on their sidelines in the Big Easy. Mora later coached with the San Francisco 49ers, where he was eventually promoted to defensive coordinator in 1999. In 2004, he earned his first head coaching gig as the man in charge of the Atlanta Falcons. In 2007, Mora took a job as the assistant head coach and defensive backs coach with the Seattle Seahawks, who later promoted him to head coach in 2009 for one season. After time away from coaching in 2010 and 2011, Mora worked as a broadcaster before UCLA hired him as their head coach. He has a 28-10 college head coaching record partway through the 2014 season. His NFL head coaching record is 32-24 to-date. He is 1-1 in the NFL playoffs. Mora has four children with his wife, Shannon. 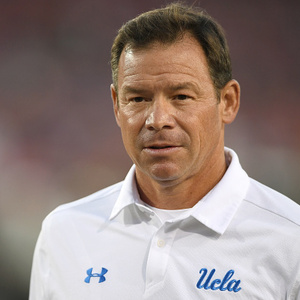