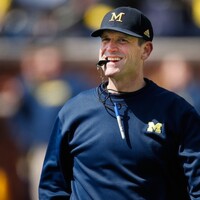 What is Jim Harbaugh's Net Worth and Salary?

Jim Harbaugh is an American football coach who has a net worth of $35 million and an annual base salary of $5 million. Although Harbaugh had a successful playing career as a quarterback at the University of Michigan and in the NFL, he is perhaps best known today as a coach. He first gained prominence as the head coach of college teams like the San Diego Toreros and the Stanford Cardinal before accepting the role of head coach for the San Francisco 49ers.

After leaving the 49ers in 2014, Jim returned to his alma mater in Michigan on a lucrative coaching contract. Harbaugh began his football journey with the Chicago Bears, playing as their quarterback from 1987 to 1993. He then played for the Indianapolis Colts for three years before ending his playing career with the Baltimore Ravens and the San Diego Chargers. He gained notable success with the Colts, with which he reached the AFC Championship Game in 1995.

James Joseph Harbaugh was born on December 23rd of 1963 in Toledo, Ohio. Raised alongside his brother John (who would also experience a successful career in football), Jim moved frequently with his family while his father accepting assistant coaching positions at various colleges across the nation. He lived in Kentucky, Iowa, Michigan, Stanford, and other locations during this period. Jim transferred between many different high schools as a result of his constantly moving family, and he eventually graduated from high school in California in 1982.

After graduating from high school, Jim played college ball for the Michigan Wolverines. Although he had a slightly slow start, Harbaugh finished his college career having racked up some impressive statistics. He ended his college career while holding Michigan's all-time record for passing yards, with 5,449 yards. During his time in college, he also earned a B.A. in communications.

By 1987, Jim was ready to play in the NFL, he was drafted by the Chicago Bears and started playing under coach Mike Ditka. However, it wasn't until the 1990 season that he first gained his position as starting quarterback. By 1991, he was starting all of the regular season games for the Bears. By 1992 and 1993, the Bears started to decline rapidly. Ditka was fired, and Harbaugh soon signed with the Indianapolis Colts. He began his career with the Colts in 1994, and he achieved one of his best seasons during 1995, leading the team to the AFC Championship Game. Jim then ended his career with the Baltimore Ravens, the San Diego Chargers, the Detroit Lions, and the Carolina Panthers.

Even while he was still playing in the NFL, Jim was pursuing a coaching career with the universities like Western Kentucky. He then served as quarterback coach for the Oakland Raiders before becoming head coach for the University of San Diego and Stanford University. In 2011, he was named the new coach of the San Francisco 49ers. Despite becoming one of their most successful coaches in just four years, Jim left the team in 2014, stating that "I didn't leave the 49ers. I felt like the 49er hierarchy left me."

Jim then joined the University of Michigan in 2015, and over the next few years, he struggled to make an impact. Despite this, Harbaugh signed a four-year extension in 2021 that would keep him at the college until 2025. 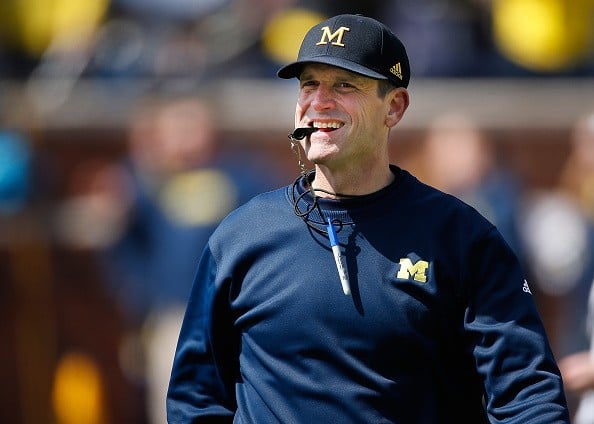 From 2011 to 2014, Jim served as the coach of the San Francisco 49ers. He joined the team with a five-year, $25-million contract in 2011. In 2015, he was hired as the head coach of his Alma Mater, the University of Michigan. His contract with Michigan pays Jim around $7.5 million per year. That's enough to make him one of the highest-paid college coaches in the US. His base salary is an average of about $550,000 per year, but Harbaugh earns $5 million in additional compensation, plus another $2 million paid to a life insurance policy. The contract also stipulated his eligibility for a 10% raise after three years. In addition, the contract gave him the possibility of a second 10% raise after five years.

By 2020, the University of Michigan had paid Jim $45.4 million, and many observers were left scratching their heads because he only achieved a 1-4 bowl record during this period. Of this $45.4 million, $33.4 million came directly from salary with an additional $2 million per year paid directly to his life insurance policy. He can withdraw those funds from his life insurance policy at any point with no tax penalties. That being said, the University of Michigan should technically get all of that money back after Harbaugh passes away. The total sum is estimated to be between $35 and $75 million by the time he passes.

In addition, it was revealed that Jim's contract gave him access to a private jet. The fine print states that this jet should be used for "recruiting purchases," and it allows him to travel around the nation at a moment's notice. During his first month at the University of Michigan, he spent at least 12 days using the jet, at a cost of $10,000 per day. This means he spent $120,000 on private jet flights during a period of time less than two weeks long.

In 2018, it was reported that Jim Harbaugh was renting out his home in Coronado, California. Rental fees range from $15,000 per month to $35,000 per month depending on the season. Located not far from San Diego Bay, this residence was first purchased by the Harbaugh estate about a year prior. Officially, the Sarah Harbaugh Revocable Trust purchased the home for just over $4 million. The residence spans 4,650 square feet of living space and features six bedrooms. The property also offers exceptional views of the ocean from rooftop decks and balconies, and it is just a few steps away from the beach.