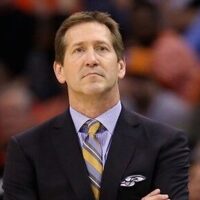 Jeff Hornacek net worth and salary: Jeff Hornacek is an American professional basketball coach and former professional basketball player who has a net worth of $12 million. He was a player from 1986 to 2000. In 2013 he became head coach of his former team, the Phoenix Suns. He coached for the Suns from 2013 to 2016. He then coached for the New York Knicks (2016 – 2018).

Jeff Hornacek was born in Elmhurst, Illinois in May 1963. He was a shooting guard who played for Iowa State from 1982 to 1986. Hornacek's #14 jersey was retired by Iowa State in 1991. Jeff was drafted #46 by the Phoenix Suns in the 1986 NBA Draft. He played for the Suns from 1986 to 1992. Hornacek played for the Philadelphia 76ers from 1992 to 1994 and for the Utah Jazz from 1994 to 2000. During his playing career he was an NBA All-Star and two time NBA Three-Point Shootout champion. Hornacek's #14 jersey was also retired by the Utah Jazz. He got into coaching as an assistant coach for the jazz from 2011 to 2013. In 2013 Hornacek got his first head coaching job with the Phoenix Suns. During his first season Jeff won NBA Coach of the Month and helped the Suns improve by 23 victories. Hornacek was the runner-up for NBA Coach of the Year to Gregg Popovich. He was hired by the New York Knicks in 2016 and stayed on as coach through the 2018 season.