Jeff Fisher net worth and salary: Jeff Fisher is an American NFL coach who has a net worth of $20 million.  His current salary is $7 million per year. Born in Culver City, California, Jeff Fisher was a football All-American while at Taft High School. He went on to attend the University of Southern California, where he would further distinguish himself, playing on the 1978 championship team, and being chosen as a Pac-10 All-Academic player. He began playing for the Chicago Bears in 1981, but was forced to retire after a broken leg and a nasty ankle injury limited his ability to play. He began coaching almost immediately, serving as a defensive assistant for the Bears, and then moving to defensive backs coach for the Philadelphia Eagles. He worked his way up over the course of the next few years, serving as defensive coordinator for the Eagles, the Rams, and the 49ers, before becoming Head Coach of the Houston Oilers, later known as the Tennessee Titans. He was initially quite successful with the Titans, but the team began suffering some severe ups and downs in the 2000s. After a record 16 seasons with the Titans, Mr. Fisher became Head Coach of the St. Louis Rams. 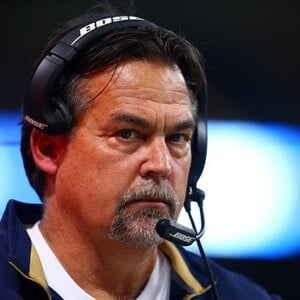