How much is Jay Gruden Worth?

Jay Gruden Net Worth and salary: Jay Gruden is an American professional football coach who has a net worth of $12 million and annual salary of $5 million. Jay Gruden was born in Tiffin, Ohio in March 1967. Jay is the brother of Monday Night Football analyst and former NFL head coach Jon Gruden. Jay Gruden played quarterback at George D. Chamberlain High School. He played for Louisville and was a four-year letterman. He was not drafted by the NFL but played for the Barcelona Dragons of the World League and the Tampa Bay Storm and Orlando Predators of the Arena Football League. As a coach Gruden started off as an Offensive Coordinator for the Nashville Kats of the Arena Football League. He got his first head coaching job for the AFL's Orlando Predators from 1998 to 2001. Gruden got his first NFL job as an Offensive Assistant with Jon's Tampa Bay Buccaneers from 2002 to 2008. He went back to the AFL to coach the Orlando Predators from 2004 to 2008. Gruden was Offensive Coordinator and Head Coach/General Manager of the Florida Tuskers of the UFL before returning to the Cincinnati Bengals as Offensive Coordinator from 2011 to 2013. He got his first NFL head coaching job in 2014 for the Washington Redskins. As a player for the Arena Football League he was a six time ArenaBowl champion and an AFL MVP. Gruden has been named to the AFL's 10th Anniversary Team and the Second Team 15th Anniversary Team. He was voted the AFL's 4th Greatest Player of All Time in 2012. He also won a Super Bowl Championship as an assistant with the Buccaneers and has won two ArenaBowls as coach. 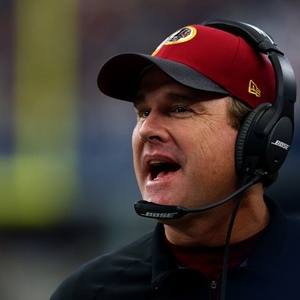