Hugh Freeze Net Worth and salary: Hugh Freeze is an American college football coach who has a net worth of $12 million. Hugh Freeze was born in Oxford, Mississippi, in 1969, and graduated from Southern Mississippi University. His coaching career began in a Tennessee high school where he served as offensive coordinator and the defensive backs coach until he was promoted to head coach for nearly a decade.

Freeze left that job when Ole Miss hired him as their tight ends coach for three seasons. In 2008, Lambuth named Freeze their head coach, and he stayed with the school until Arkansas State tapped him to become the team's new offensive coordinator. Arkansas State promoted him one season later to head coach, and, after a year, he left to guide the ship at Ole Miss, where he had previously coached. In 2005, Freeze also served as Ole Miss' assistant athletic director. He has amassed a 53-21 career win-loss record midway through the 2014 season and is 2-0 all-time in bowl games. Freeze won one Sun Belt championship in 2011 and one Mid-South Conference West division title in 2009. He earned AFCA Southeast Region Coach of the Year and Mid-South Conference Coach of the Year honors that same year. He is a four-time Associated Press High School Coach of the Year. Freeze has three children with his wife, Jill. 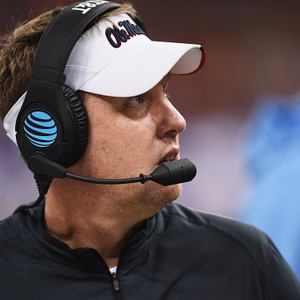