Gus Malzahn Net Worth: Gus Malzahn is an American college football coach and former player who has a net worth of $10 million. Born in Irving, Texas, in 1965, Gus Malzahn played college football for the University of Arkansas Razorbacks and later for Henderson State as a wide receiver. Malzahn's coaching career began with Hughes High School where he was a defensive coordinator and later the head coach.

He coached high school until 2006, when he landed at Arkansas as the team's offensive coordinator and wide receivers coach in 2006. A season later, Malzahn accepted a position as co-offensive coordinator, assistant head coach, and quarterbacks coach with Tulsa. Two years later, he began coaching quarterbacks and calling the offense for the Auburn Tigers. Malzahn coached at Arkansas State as a head coach in 2012 before being hired back by Auburn in 2013 as the head coach. Malzahn has been in the role ever since. Midway through the 2014 season, Malzahn has a 29-8 head coaching record in college and is 0-1 all-time in bowl games. He won one Sun Belt championship with Arkansas State in 2012 and one SEC championship with Auburn in 2013. He earned SEC and AP College Football Coach of the Year honors in 2013, as well as the Paul Bear Bryant Award. Malzahn published his book, "The Hurry Up, No Huddle: An Offensive Philosophy" in 2003. He has two daughters with his wife, Kristi Otwell. 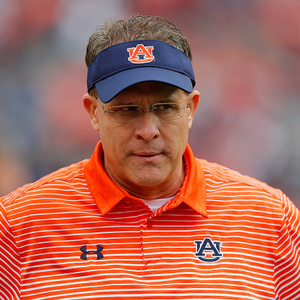