Geno Auriemma net worth and salary: Geno Auriemma is an American college basketball coach who has a net worth of $10 million and an annual salary of $1.95 million. Geno Auriemma is currently the head coach of the University of Connecticut Huskies women's basketball team. As of this writing, Geno has led the UConn women to 11 Division 1 national championship victories. He has won the Naismith College Coach of the Year award seven times. Geno Auriemma was born on March 23, 1954 in Montella, Italy. Geno emigrated to Norristown, Pennsylvania when he was seven years old. He graduated from West Chester University of Pennsylvania in 1977 and was quickly hired as an assistant basketball coach at St. Joseph's University. Geno has been the coach of UConn since August 1985. He was previously an assistant coach at St. Joseph's, Bishop Kenrick high school and Virginia. He currently has the highest winning percentage among NCAA basketball coaches, on any level male or female. He also has more Division 1 championships than any other coach, male or female. 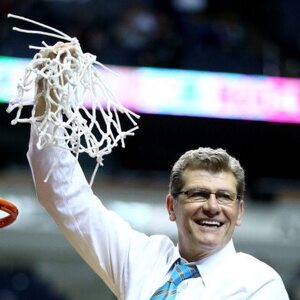