Patterson's college coaching career began at his alma mater as he held a graduate assistant position in 1982 with the Wildcats. Patterson then accepted a position as a linebackers coach with Tennessee Tech for the next two seasons. He coached linebackers for a season with UC Davis before being tapped as Cal Lutheran's defensive coordinator in 1988. Patterson went on to coach at Pittsburg State and Sonoma State before scoring his first head coaching gig with the Oregon Lightning Bolts, a professional football league that folded before its first season began, in 1992. He then returned to a position coaching job with Utah State, Navy, New Mexico, and TCU. In 2000, after two seasons as the Horned Frogs' defensive coordinator, Patterson was promoted to head coach, and has held the position ever since. Midway through the 2014 season, Patterson has a 129-45 head coaching record and a 7-4 record in bowl games, including a Rose Bowl victory during the 2011 season. 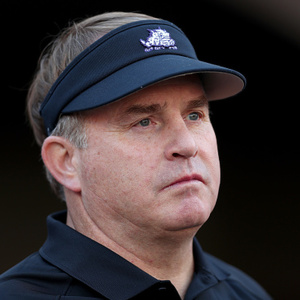