He began his professional career in 1964 with Bayern Munich, appearing in 427 matches and scoring 60 goals before jumping to the New York Cosmos of the North American Soccer League. Beckenbauer played for the Cosmos for four seasons and won three Soccer Bowls. He then appeared in 28 matches for Hamburger SV from 1980 until 1982 before returning to the Cosmos for his final season in 1983. He retired following the season with 587 caps and 81 goals in his career. Beckenbauer was also a decorated international football star, winning European Footballer of the Year honors twice. He played in more than 100 matches for West Germany. He is one of two people to ever win a FIFA World Cup as a coach and a player, and the only person to win it as a coach and a captain. He earned World Team of the 20th Century honors and was part of the 2002 FIFA World Cup Dream Team. Beckenbauer was inducted into the U.S. National Soccer Hall of Fame for his time with the Cosmos. He managed the West German national team from 1984 until 1990, defeating Argentina in the World Cup finals. He began managing Olympique de Marseille, then coached Bayern Munich from 1993 until 1994 and again in 1996. During the summer of 2014, Beckenbauer was banned from football by FIFA for 90 days. He was accused of not cooperating during an investigation into the placement of the 2018 and 2022 World Cups and possible corruption; FIFA lifted the ban after he later agreed to be cooperative. Beckenbauer has been married three times and has five children with his different wives. 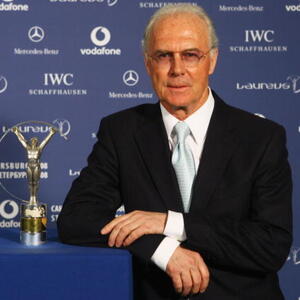