What is Erik Spoelstra's Net Worth and Salary?

Erik Spoelstra is an American professional basketball coach who has a net worth of $14 million and a salary of $3 million. He is best known for coaching the Miami Heat of the NBA. He initially started working for the Heat in 2001 as an assistant coach and director of scouting. During this time, Miami won the 2006 NBA Finals. During the 2008-2009 season, Spoelstra was promoted to head coach. Erik then led the Heat to two consecutive championship titles in 2012 and 2013, and they also appeared in four consecutive NBA finals from 2011 to 2014. In 2020, Erik Spoelstra led the team to the NBA Finals once again.

Erik is the first Asian-American head coach of any team within the four major North American sports leagues. He is of Filipino descent on his mother's side.

Erik Jon Celino Spoelstra was born on November 1st of 1970 in Evanston, Illinois. His father has Dutch, Irish, and American roots, and he was formerly an NBA executive who worked for the Buffalo Braves, the Portland Trail Blazers, the Denver Nuggets, and New Jersey Nets. His mother is a native of San Pablo, Laguna, Philippines. Erik's grandfather was the late Watson Spoelstra, a famous sportswriter for "The Detroit News."

Erik grew up in Buffalo, New York but moved to Portland, Oregon partway through his childhood. During his high school years in Portland, Spoelstra played point guard on the basketball team and excelled. He eventually participated in Sonny Vaccaro's All-Star camp alongside future NBA players like Alonzo Mourning and Billy Owens.

After graduating from high school, Erik received multiple basketball scholarship offers from various universities. He eventually enrolled at his hometown college, the University of Portland. By 1989, he had been named West Coast Conference freshman of the year. In total, he spent four years playing point guard for Portland, scoring over 1,000 points and rivaled some of the school's highest achievers in terms of overall statistics. He also performed well in academics, eventually graduating from the University of Portland in 1992 with a degree in communications.

After graduating from college, Spoelstra immediately landed a job as a player/assistant coach for TuS Herten, a German professional basketball in the second division of Basketball Bundesliga. During this period, Erik learned a great deal about coaching and gained considerable experience helping a local youth team in Westphalia, Germany. His playing career faltered, however, and Erik suffered from serious back injuries. Eventually, he toyed with the idea of getting back surgery. Although the club was willing to offer him a two-year contract in 1995, he ultimately chose to return to the United States and begin coaching with the Miami Heat.

It was the director of personnel Roya Vaziri who convinced Miami GM Dave Wohl to give Spoelstra a chance. Erik's first role within the team was as video coordinator, and it wasn't immediately clear whether this would be a permanent position. Pat Riley then became the new coach, and he was unable to bring in his own choice of video coordinator due to contract issues. Erik then spent another two years as video coordinator before being promoted to assistant coach and advance scout in 1999. 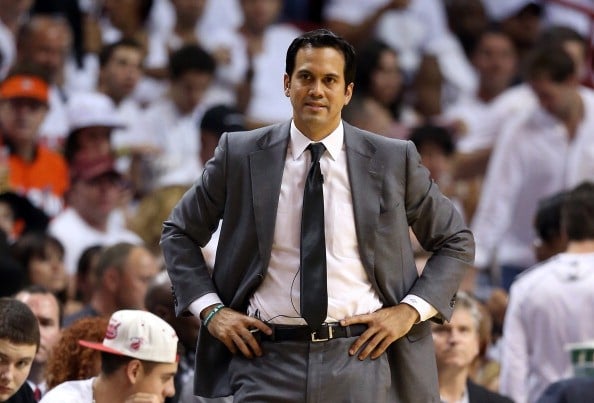 By 2001, he had become the director of scouting while also continuing with his assistant coaching duties. This rapid rise up the ladder has been largely attributed to a strong work ethic. During this period, he helped Dwayne Wade improve his jump shot by improving his balance. In 2006, the Heat had won the NBA championship – the first of Spoelstra's coaching career.

In 2008, Erik was named as the new head coach after the departure of Pat Riley. The departing coach handpicked Spoelstra as his successor and claimed that younger coaches like Erik were able to bring innovation and fresh ideas to the game. During his first year in charge, Erik led the Heat to the NBA playoffs, but they were defeated in the first round. Next season, they suffered a similar fate. Spoelstra then brought in LeBron James and Chris Bosh in 2010 and aimed for greater success. During this period, questions were being raised about his leadership, and some players felt they were being worked too hard. However, Erik proved his worth and led the team to the NBA Finals that season, although they ultimately lost to the Mavericks.

After signing a new $6-million contract, Spoelstra returned to the NBA Finals in 2012 and won the championship. He repeated the feat once again in the 2014 NBA Finals. The team then failed to reach the finals for many years until 2020, when they lost against the Lakers. By 2021, Erik had won 600 games as a head coach for Miami, joining a select group of only six coaches who had managed to do this with a single team.

In 2016, it was reported that Erik Spoelstra had purchased a new luxury home in Florida. The residence lies in the affluent neighborhood of Coconut Grove, and it cost the coach $2.6 million. The home spans 4,200 square feet of living space and features five bedrooms. Originally built in 1937, this residence has been described as "historic." A gated brick driveway ends in a grand pillared entryway, and the home is surrounded by lush, tropical gardens. In addition, there are separate guest quarters, a pool, a wet bar, and a covered deck. Additional highlights include a family room with a vaulted wood-beam ceiling and a fireplace. 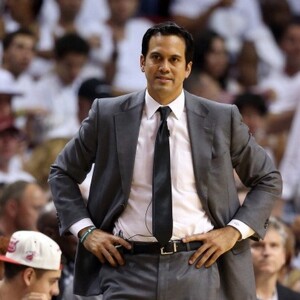