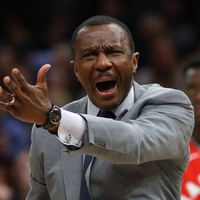 Dwane Casey net worth and salary: Dwane Casey is an American professional basketball coach who has a net worth of $9 million. Dwane Casey was born in Indianapolis, Indiana in April 1957. Casey graduated from Union County High School and the University of Kentucky where he won an NCAA Tournament Championship and NIT Championship. Casey started his coaching career as an assistant at Kentucky from 1979 to 1980. He moved to become an assistant with Western Kentucky from 1980 to 1985 before returning as an assistant at Kentucky from 1985 to 1989. He moved to the Japanese Basketball League where he was head coach of the Sekisui Chemical from 1989 to 1992 and Isuzu Motors Lynx from 1992 to 1994. Casey joined the NBA ranks as assistant coach for the Seattle SuperSonics from 1994 to 2005. He got his first NBA head coaching job with the Minnesota Timberwolves from 2005 to 2007. From 2008 to 2011 Casey was an assistant coach for the Dallas Mavericks and in 2011 he became head coach of the Toronto Raptors. As an assistant he won an NBA Championship with the Mavericks in 2011. In his last contract with the Raptors, Casey was earning $6 million per year. He was fired in May 2018 after getting shut out in the playoffs by the Cleveland Cavaliers.