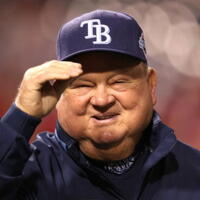 Don Zimmer net worth: Don Zimmer was an American baseball player and coach in Major League Baseball who had a net worth of $10 million. Zimmer was born in Cincinnati, Ohio, in 1931, and began playing pro baseball with the Brooklyn Dodgers in 1949. He stuck with the team until 1959 (returning for one year in 1963) before he went on to play infielder for the Chicago Cubs, New York Mets, hometown Cincinnati Reds, and the Washington Senators. Zimmer suffered an injury in a 1953 minor league game that led to Major League Baseball requiring all players to wear batting helmets. Zimmer batted a .235 average over his eleven-year career with 91 home runs and 352 runs batted in. Once retired from playing, he coached in the minors before landing jobs around Major League Baseball, including gigs with the Expos, Padres, Red Sox, Yankees and Rockies. He managed the Padres, Red Sox, Rangers and Cubs at various points in his career. Nicknamed "Gerbil", Zimmer was part of the coaching staff that won four World Series titles with the New York Yankees during the 1990s. He wrote two books, "The Zen of Zim" and "Zim: A Baseball Life". He married his wife, Carol Jean Bauerle, at home plate in 1951. The high school sweethearts lived in Florida until Zimmer passed away in June 2014 after suffering from heart and kidney issues.