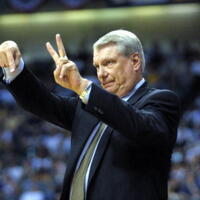 Don Nelson net worth: Don Nelson is an American former professional basketball player and head coach who has a net worth of $30 million. Don Nelson was born in Muskegon, Michigan in May 1940. He was a 6'6″ small forward who played his college ball at Iowa. Nelson was drafted by the Chicago Zephyrs in the 1962 NBA Draft and played there until 1963. He played for the Los Angeles Lakers from 1963 to 1965 and for the Boston Celtics from 1965 to 1976. During his playing career he won five NBA Championship with the Celtics and his #19 is retired by the Boston Celtics. Nelson became the head coach of the Milwaukee Bucks in 1976 until 1987. He coached the Golden State Warriors from 1988 to 1995 and the New York Knicks from 1995 to 1996. Nelson coached the Dallas Mavericks from 1997 to 2005 and then the Golden State Warriors again from 2006 to 2010. As a coach he was named NBA Coach of the Year three times and was a head coach in the NBA All-Star Game twice. Nelson has been named as one of the Top 10 Coaches in NBA History. He also won a gold medal coaching the US men's team at the 1994 FIBA World Championship. Nelson was inducted into the Naismith Memorial Basketball Hall of Fame in 2012. He announced in 2015 that he would build the first house made of hemp in Hawaii.