He played varsity basketball for the University of Kansas and his team won the national championship in 1952 and made the NCAA tournament finals in 1953. From 1953 to 1955 he was an assistant coach for Kansas and from 1955 to 1958 he served as an assistant coach for Air Force. Smith went to the University of North Carolina where he was assistant coach from 1958 to 1961. From 1961 to 1997 he was head coach for North Carolina. In 1976 he also coached the United States men's national team. When he retired Smith held the record for most victories with 879. He won two national championships as a coach at North Carolina and also appeared in 11 Final Fours. Smith was known for his focus on academics and 96.6% of his athletes received their degrees.

Dean Smith's most famous student athlete of all time was Michael Jordan. He helped to promote desegregation and recruited the school's first African American basketball player on scholarship. During his coaching career he won a Gold Medal at the Olympics, 13 ACC Tournament Championships, 17 ACC Regular Season Champions, and 1 NIT Championship. Smith was a four time National Coach of the Year and nine time ACC Coach of the Year. He was inducted into the North Carolina Sports Hall of Fame, Kansas Sports Hall of Fame, and FIBA Hall of Fame. Dean Smith passed away on February 7, 2015 at 83 years old. 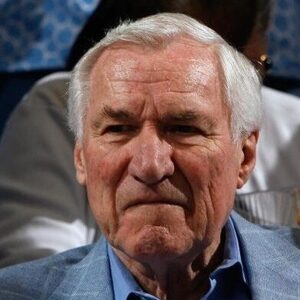