Dawn Staley Net Worth and salary: Dawn Staley is an American professional basketball player and coach who has a net worth of $1 million. Dawn Staley was born in Philadelphia, Pennsylvania in May 1970. Dawn was named the national high school player of the year as a senior at Murrel Dobbins Tech High School.

She attended the University of Virginia in Charlottesville, VA and led her team to four NCAA Tournaments including three Finals Fours and a National Championship Game. Staley was named the ACC female athlete of the year and the national player of the year. Her #24 is retired at the UVA. Staley played professional basketball in France, Italy, Spain, and Brazil before joining the Richmond Rage of the American Basketball League in 1996. She was drafted #9 by the Charlotte Sting in the 1999 WNBA Draft. She played for the Sting from 1999 to 2005 before being traded to the Houston Comets where she finished her career from 2005 to 2006. Staley was a six time WNBA All-Star from 2001 to 2006. She won the Woman One Award in 2005 and was runner-up for the Wooden Cup Award. Staley has also competed for the United States and has won Gold medals at the 1991 World University Games, 1992 Jones Cup, 1996 Atlanta Olympic Games, 2000 Sydney Olympic Games, 2004 Athens Olympic games, and 2000 FIBA World Championships. She became an assistant coach for the USA National team in 2006. As a coach Staley went on to win two more Gold medals at the 2008 Beijing Olympic Games and the 2007 Pan American Games. She became head coach at Temple University from 2000 to 2008 and now coaches for South Carolina. 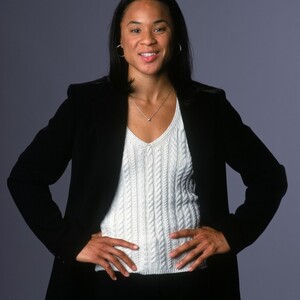