Danny Manning Net Worth: Danny Manning is an American college basketball coach and former professional basketball player who has a net worth of $20 million. Born in Hattiesburg, Mississippi in 1966, Danny Manning attended high school in North Carolina and later Kansas before deciding to play college basketball nearby for the University of Kansas Jayhawks from 1984 until 1989. Manning earned three Big Eight Player of the Year titles from 1986 until 1988. In 1987, he was named the USA Basketball Male Athlete of the Year, and in 1988, he earned NABC Player of the Year honors. He was also awarded the Naismith College Player of the Year award and the John R. Wooden Award the same year. He led the Jayhawks to the NCAA men's national championship in 1998, where he was named the NCAA Final Four Most Outstanding Player. The Los Angeles Clippers drafted Manning with the first overall pick during the 1988 NBA Draft; he played in Los Angeles until 1994. Manning earned NBA All-Star honors in 1993 and 1994 while with the Clippers. He later played for the Atlanta Hawks, Phoenix Suns, Milwaukee Bucks, Utah Jazz, Dallas Mavericks, and Detroit Pistons. Manning finished his pro playing career with 12,367 points, 2,063 assists, and 1,000 steals. He played internationally on the U.S. men's team, earning a bronze medal at the 1998 Olympic Games in Seoul. After hanging up his jersey, Manning joined his alma mater as a team manager from 2003 until 2006, when he was promoted to assistant coach. He landed the head coaching gig at Tulsa from 2012 until 2014 and has been the head coach at Wake Forest since 2014. He was part of the Jayhawks' 2008 NCAA Championship run. In 2014, he won Conference USA Coach of the Year honors en route to guiding Tulsa to the Conference USA tournament championship and the regular season championship. 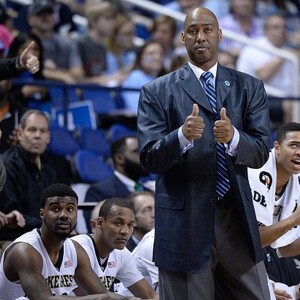