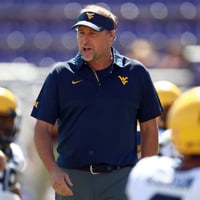 Dana Holgorsen Net Worth and salary: Dana Holgorsen is an American college football coach who has a net worth of $11 million. Born in 1971 in Davenport, Iowa, Dana Holgorsen played college football near his hometown at Iowa Wesleyan from 1991 until 1992. In 1993, he began his coaching career at Valdosta State as a quarterbacks, wide receivers, and special teams coach. Three years later, he accepted the same position at Mississippi College before moving to Wingate to coach wide receivers and quarterbacks. A season later, Holgorsen accepted a job as the wide receivers coach with Texas Tech. After four years, he was promoted to co-offensive coordinator, and, two seasons later, he became the sole offensive coordinator for the Red Raiders. In 2008, Holgorsen left Texas Tech to become the offensive coordinator and quarterbacks coach at Houston, where he stayed until 2009. In 2010, Holgorsen became the offensive coordinator for Oklahoma State for one season before West Virginia hired him as their head coach. Midway through the 2014 season, Holgorsen has amassed a 27-22 career win-loss record to go along with a .500 bowl record in two appearances. Holgorsen earned FWAA First-Year Coach of the Year honors in 2011. He is the father of three children and lives in Morgantown, West Virginia.