Cynthia Cooper was born in Chicago, Illinois in April 1963. She was a 5'10" point guard and shooting guard who played at Locke High School. Cooper played her college basketball for USC and had her #44 retired. She played in Spain from 1986 to 1992. Cooper played for the WNBA's Houston Comets from 1997 to 200 and again in 2003. She won four straight WNBA championships and Finals MVPs from 1997 to 2000. She was also a two time WNBA MVP and three time WNBA All-Star. Cooper was selected to the All-WNBA First Team from 1997 to 2000 and was the WNBA scoring champion from 1997 to 1999. She is a member of the Basketball Hall of Fame and Women's Basketball Hall of Fame. She has coached the Phoenix Mercury, Prairie View A&M, UNC Wilmington, Texas Southern, and USC and was named CAA Coach of the Year in 2010. Cooper also won a gold medal with USA Basketball in 1987. 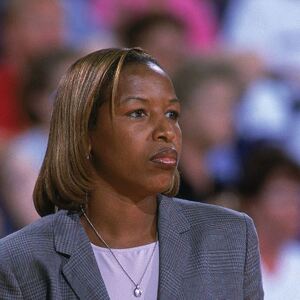