Colin Montgomerie net worth: Colin Montgomerie is a Scottish professional golfer who has a net worth of $55 million. He's won a record eight Tour Order of Merit titles, awarded to the European golfer with the highest earnings for the year. In his career, Montgomerie has won 31 European Tour events.

In 1988 he was named the Sir Henry Cotton Rookie of the Year. He's also won the European Tour Player of the Year four times. He won his first event, the Portuguese Open, in 1989 by eight strokes, and participated in his first Ryder Cup in 1991. Montogomerie broke into the Top-10 of the Official World Golf Rankings in 1994, and spent nearly 400 weeks there over the course of his career, peaking at number two. Montgomerie is considered to be one of the best players to have never won a major. He's finished second or tied for second five times: three in the U.S. Open, and once each in The Open Championship and PGA Championship. Montgomerie has been involved in eight Ryder Cup events, sinking the winning putt in 2004 and captaining the 2010 team to a 14½-13½ victory. For his Ryder Cup career he has 23.5 points and has never lost a singles match. In June 2013 Montgomerie turned 50 and joined the Champions Tour, participating in events on the senior circuit. 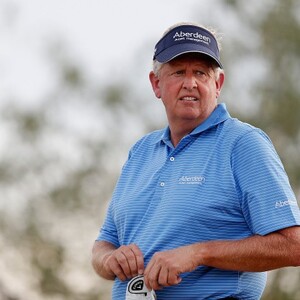