Petersen's first foray into coaching came with his alma mater from 1987 until 1991. In 1992, Petersen coached quarterbacks at Pittsburgh before he took a job with Portland State for the next two seasons. In 1995, Petersen began a five-year stint as Oregon's wide receivers coach before Boise State hired him as an offensive coordinator. In 2006, Petersen was promoted to head coach at Boise State, where he made a name for himself on the national radar as he turned the Broncos into a perennial powerhouse despite the team not playing in a highly touted BCS conference. Petersen's Broncos won four WAC championships and one Mountain West title. In 2014, Petersen accepted a job as the head coach of Washington. He is 99-17 all-time as a head coach with a 5-2 record in bowl games midway through the 2014 season. Petersen is a two-time Paul Bear Bryant Award winner (2006, 2009). He has two sons with his wife, Barbara. 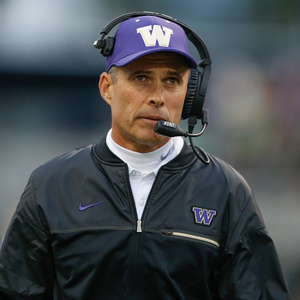