Butch Jones Net Worth: Butch Jones is an American head football coach who has a net worth of $15 million and annual salary of $3.085 million. Lyle Allen "Butch" Jones, Jr. was born January 17, 1968 Saugatuck, Michigan. He is the current head football coach of the University of Tennessee. He previously coached at Cincinnati from (2010-2012) and Central Michigan University (CMU) (2007-2009).

Jones played college football at Ferris State University and later interned for the Tampa Bay Buccaneers, going on to earn a job as a defensive assistant at Rutgers University straight out of college in 1990. After his stint with Central Michigan and Cincinnati, Jones was then named the 23rd head coach of the Tennessee Volunteers, replacing Derek Dooley. Jones has won four conference championships in his seven seasons as a head coach, including the Big East title in 2011 and 2012 with Cincinnati and the 2007 and 2009 Mid-American Conference titles at Central Michigan. He earned Big East Conference Coach of the Year honors from the league after his 10-win season with the Bearcats in 2011 and earned the same honor from CBSSports.com in 2012, a year in which the Cincinnati squad captured its second consecutive bowl victory and finished with a top 25 ranking. The Bearcats finished the regular season 9-3 with a 5-2 record in the Big East to share the conference crown. A staple of Jones's programs has been success in the classroom, and that has certainly continued during his time at Tennessee. Jones is a 1990 graduate of Ferris State University in Michigan, where he was a two-year letterman on the football team. Jones and his wife, Barb, are the parents of three sons: Alex (17), Adam (12), and Andrew (7). 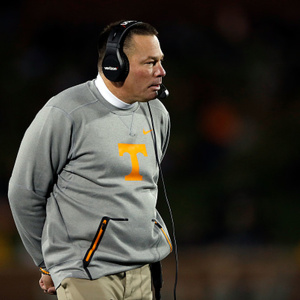