Bret Bielema Net Worth: Bret Bielema is an American college football coach and former player who has a net worth of $8 million. Born in Prophetstown, Illinois, in 1970, Bret Bielema stayed in the Midwest for college, playing at Iowa from 1989 until 1992. He had a brief stint with the Milwaukee Mustangs in 1994 before beginning his coaching career as a graduate assistant for the Hawkeyes. Bielema was promoted to linebackers coach with Iowa until 2001, when he landed the job of co-defensive coordinator at Kansas State from 2002 until 2003. In 2004, Bielema was hired on as the defensive coordinator at the University of Wisconsin, and, a season later, was promoted to head coach of the Badgers, a title he held from 2006 until 2012, when he took a job as the head coach of the University of Arkansas. Bielema has amassed a 77-38 head coaching record midway through the 2014 season and is 2-4 all-time in bowl games. Bielema has three Big Ten championships (2010, 2011, 2012), and two Big Ten Leaders division titles (2011, 2012). To date, he lost every Rose Bowl game he coached in. He earned Big Ten Coach of the Year honors once in 2006. Bielema has been married to his wife, Jen Hielsberg, since 2012. 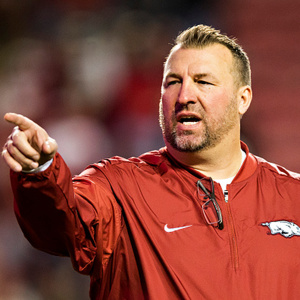