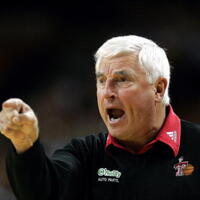 What is Bobby Knight's Net Worth and Salary?

Bobby Knight is a retired American basketball coach who has a net worth of $8 million. Bobby Knight is best known for coaching the Indiana Hoosiers for nearly three decades, from 1971 to 2000. During his tenure, he led the Hoosiers to three NCAA championships and 11 Big Ten Conference championships, and had two undefeated seasons. Knight also coached for the Army and Texas Tech, and led the US men's basketball team to a gold medal at the 1984 Summer Olympics. Within the NCAA Division I, Bobby won 902 games. That's the highest of any retired coach, and third behind current coaches. While renowned for his coaching acumen, he also attracted controversy for his hot-tempered and frequently abusive behavior. He famously threw a chair across the court during a game. After retiring, Bobby served as a part-time commentator with ESPN from 2008 to 2015. He has also penned a number of books.

Bobby Knight was born on October 25, 1940 in Orrville, Ohio. There, he went to Orrville High School, where he began his career playing organized basketball.

For college, Knight went to the Ohio State University from 1958 to 1962. There, he played college basketball under Hall of Fame coach Fred Taylor. In 1960, Knight and the Ohio State Buckeyes won the NCAA championship title. They subsequently made it to two further consecutive championships, but fell to the Cincinnati Bearcats both times.

Following his graduation from OSU, Knight served as the junior varsity basketball coach at Ohio's Cuyahoga Falls High School for a year. He then enlisted in the US Army, serving on active duty from 1963 to 1965 and subsequently in the reserves from 1965 to 1969. During his service, Knight became an assistant coach for the Army Black Knights; he was later promoted to head coach. Across his six seasons as head coach at West Point, Knight accumulated 102 wins. Beyond his coaching prowess, he also established a reputation for having a volatile temper that would often explode into physical violence, something that would haunt him throughout his career.

In 1971, Knight joined Indiana University as head coach. He quickly proved himself to be an all-time great in the position, leading the Hoosiers to the Big Ten championship title and then the Final Four in the 1972-73 season. This was followed by three more consecutive Big Ten titles. Moreover, in both 1974-75 and 1975-76, the Hoosiers went undefeated; the team also won the NCAA championship title in 1976. Closing out the decade, Knight led Indiana to victory in the NIT championship. This success continued in the 80s, starting with another Big Ten championship title. In 1980-81, the Hoosiers claimed another conference title and another NCAA championship. This was followed by yet another Big Ten title. Later, in 1987, Knight led Indiana to his third and the school's fifth NCAA championship victory. He carried his success through the early-to-mid 90s, with his hot streak finally fizzling out in 1994. Overall, across Knight's 29-year tenure at Indiana, the Hoosiers claimed 662 wins and 11 Big Ten Conference titles.

Knight was let go from Indiana in 2000 after an investigation revealed that he had choked former player Neil Reed during practice three years prior. Other instances of student abuse were later reported. Knight's firing elicited both support and outrage, and made headlines across the country. 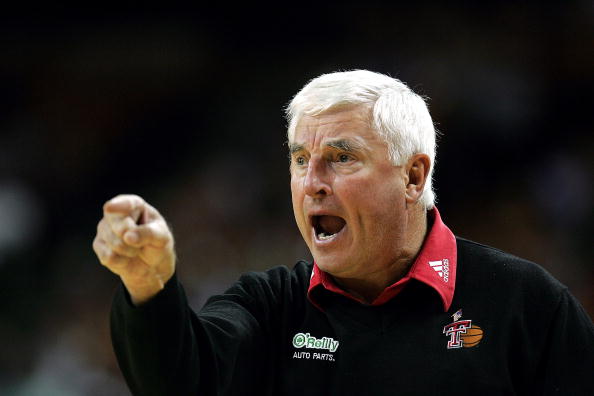 A year after his dismissal from Indiana, Knight accepted the position of head coach at Texas Tech University. He went on to substantially improve the program, leading the Raiders to four consecutive postseason appearances in his first four years at the school. The team had a rough go of it in 2006, but rebounded in 2007 to make it to another postseason. From 2001 to 2007, Knight led the Raiders to 126 wins. He ultimately retired in early 2008, and was succeeded by his son Pat. At the time of his retirement, Knight held the record for most NCAA Division I men's basketball wins, with 902.

According to a report released by the University of Indiana in 2000, his final year coaching for the Hoosiers, Bobby's salary at that time was $163,118. His contract also granted him use of a new car every year, use of the school's private plane for official business AND free undergrad tuition for his two sons. Throughout his time at Indiana Bobby supplemented his base salary with outside income from things like deferred compensation, clothing endorsements and speaking fees. Bobby was operating under a contract that was originally signed in 1987 then extended in 1997. When he was fired he had one year left on the final extension.

In March 2002 it was revealed that Bobby returned his $250,000 base salary for the previous season by his own choice, telling a paper at the time:

"I'm just not at all satisfied with what transpired with our team in terms of our fundamental execution. I don't think it's anybody's fault but mine. I don't think I should be paid for that."

On the world stage, Knight coached the US men's basketball teams at the 1979 Pan American Games in San Juan and the 1984 Summer Olympic Games in Los Angeles. Both teams won the gold medal.

After retiring from coaching in 2008, Knight became a studio analyst for college basketball games on ESPN. He remained in this position until 2015.

Knight, his coaching career, and his controversial behavior have been the subjects of many books. Perhaps the most notable is John Feinstein's landmark bestseller "A Season on the Brink," which chronicles the 1985-86 Indiana Hoosiers season. The book was adapted into an ESPN television film in 2002. Knight has also been the subject of such titles as Joan Mellen's "Bob Knight: His Own Man," Rich J. Wolfe's "Oh, What a Knight: Knightmares," and Steve Delsohn and Mark Heisler's "Bob Knight: An Unauthorized Biography," among others. With sports journalist and friend Bob Hammel, Knight published an autobiography entitled "Knight: My Story" in 2003.

In 1963, Knight married Nancy Falk. The couple had two sons named Tim and Pat before divorcing in 1985. Subsequently, in 1988, Knight wed former high school basketball coach Karen Edgar. It was reported in 2019 that he was in ill health, something corroborated by a public appearance in which he struggled with his memory.

Holding education in lofty regard, Knight has donated to the schools he's worked for in the past. He endowed two chairs at Indiana University, and raised around $5 million for IU's library system. Knight also made donations to the Texas Tech library. In other endeavors, he supported Donald Trump's 2016 presidential campaign.

The Knights also own a modest home in Lubbock, Texas.