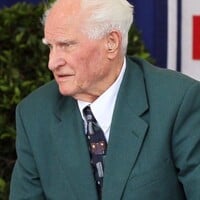 Bobby Doerr net worth: Bobby Doerr was a former Major League Baseball coach and player who had a net worth of $5 million dollars at the time of his death in 2017. Born in 1918 in Los Angeles, California, Doerr's professional baseball career began before he even graduated high school in 1936. One year after earning his diploma, the second baseman made his MLB debut with the Boston Red Sox on April 20, 1937. The nine-time All Star would play every game of his career with the Red Sox until he retired in 1951. Doerr shattered several team records (career games, at-bats, hits, doubles, total bases and RBIs) that were later broken by Ted Williams. After retirement, Doerr began scouting with the Red Sox until he started coaching in the late 1960s. In 1986, Doerr was inducted into the Baseball Hall of Fame and became its oldest living member in 2012. The Red Sox have since retired his number (one). He was the oldest person to attend the 2012 celebration of the 100th Anniversary of Fenway Park in Boston. Bobby Doerr died on November 13, 2017 at the age of 99.