What was Bobby Bowden's Net Worth?

When he first was hired by Florida State, Bobby's annual salary was $37,500. By the early 1980s he was making $140,000 per year. That's the same as around $400,000 today after adjusting fori inflation.  Bobby was the first college coach to earn $1 million per year in salary. He achieved that feat in 1995. At the end of his time with Florida State, Bowden was earning $2 million per year. At that level, he was frequently the highest-paid public employee of the state of Florida,

Bowden became offensive coordinator at West Virginia in 1966 and became their head coach in 1970. By the mid-1970s Bobby was earning $35,000 per year from West Virginia. He was wooed away by Florida State when they offered him a raise to $37,500.

He was head coach for Florida State from 1976 until 2009. Bowden holds the NCAA record for most career wins and bowl wins for a Division 1 FBS coach. With Florida State he won an Associated Press and Coaches Poll National Title in 1993 and a BCS National Championship in 1999. He was fired two weeks after his 80th birthday. Bowden holds the record at 389 wins but had 12 wins vacated which placed him second to Joe Paterno until Paterno had many of his wins vacated. Bowden won the Bobby Dodd Coach of the Year Award in 1980 and the Walter camp Coach of the Year Award in 1991. He won the Amos Alonzo Stagg Award in 2011 and was inducted into the College Football Hall of Fame in 2006. He has also co-authored several books. 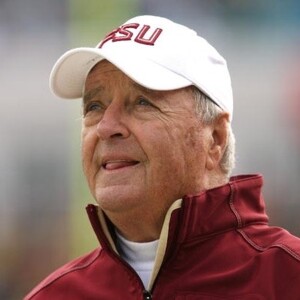