How much is Bob Stoops Worth?

Bob Stoops Net Worth: Bob Stoops is an American college football head coach who has a net worth of $18 million. Bob Stoops was born September 9, 1960 in Youngstown, Ohio. He is best known as the head coach of the Oklahoma Sooners football team of the University of Oklahoma. During the 2000 season, he led the Sooners to an Orange Bowl victory and a national championship. Before he began his coaching stint at Oklahoma, Stoops held various coordinator and coach positions with Iowa, Kansas State and Florida. In 2000, Stoops led his team to three consecutive wins over ranked teams including Texas, Kansas State and Nebraska. During his college years at the University of Iowa, Stoops was a four-year starter, and one-time All-Big Ten selection at defensive back and one of the Big Ten's Most Valuable Players in 1982. He went on to coach in Iowa (1983-87), Kent State (1988-90), Florida (1996-98) before settling in with the Oklahoma Sooners in 1999. Stoops was awarded the 2000 Paul "Bear" Bryant Award and the 2000 and 2003 Walter Camp Coach of the Year. Younger brother Mike Stoops is the defensive coordinator for the University of Oklahoma and was previously head coach for the University of Arizona. Another brother (the youngest), Mark Stoops, recently became the head coach at the University of Kentucky. Older brother Ron Jr., is an assistant coach at Youngstown State University in Youngstown, Ohio. 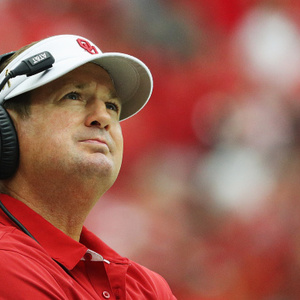