Bob Huggins Net Worth and salary: Bob Huggins is an American college basketball coach who has a net worth of $12 million dollars. Born in Morgantown, West Virginia, in 1953, Bob Huggins played basketball for three seasons at West Virginia University after transferring out of Ohio University. He finished his career with the Mountaineers after scoring 800 points.

When he failed to make an NBA team, he went back to school to earn his Master's degree and began working as a graduate assistant for the basketball team. He was an associate coach at Ohio State and took his first head-coaching gig at Walsh University when he was 27 years old. Huggins guided Walsh to a 71-26 record and earned NAIA District 22 Coach of the Year accolades twice. After finishing his final season with a perfect record, Huggins worked as an assistant coach at the University of Central Florida before landing the lead role at the University of Akron with an NCAA tournament appearance. Huggins is credited with revamping the Cincinnati basketball program in three seasons, making 14 straight NCAA tournament appearances and earning one trip to the Final Four. He resigned in 2005 when school president Nancy Zimpher felt his coaching style didn't mesh with her plan to restore academic success to UC's athletics department. After a yearlong break, Huggins took over the Kansas State University program before landing the head-coaching job at his alma mater in 2007. Since landing at WVU, Huggins has guided the Mountaineers to five NCAA Tournament appearances and one invitation to the NIT Tournament. West Virginia made it to one Final Four in 2009-10 and won the Big East Tournament Championship in 2010. Huggins, nicknamed "Huggy Bear", has two daughters with his wife, June. 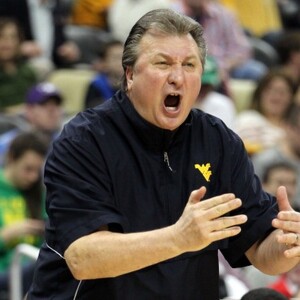