The Badgers have appeared in the NCAA tournament in each of Ryan's twelve seasons, and have advanced to the Sweet 16's five times, including the Elite Eight in 2005. In the history of the NCAA tournament, Ryan is one of only three coaches to lead his team to the Big Dance in each of his first twelve seasons at one school. With Ryan at the helm, the Baders have never finished outside of the top four in the Big Ten standings. Under Ryan's leadership at the University of Wisconsin-Madison, four of his former assistant coaches have gone on to take over Division I head coaching positions, and five former players have also moved on to assistant coaching positions. During the 2014 NCAA Tournament, Ryan got his 700th victory during an 83–57 win over Minnesota and also reached his first Division I Final Four with a 64–63 overtime win over Arizona. He has written three books: Bo Ryan: Another Hill to Climb, The Swing Offense, and Passing and Catching: the Lost Art. Ryan was born in December of 1947 just outside of Philadelphia in Chester, Pennsylvania. He attended Wilkes University where he starred as a high-scoring guard and earned a degree in Business Administration in 1969. He and his wife, Kelly, have five children: Megan, Will, Matt, Brenna, and Mairin. 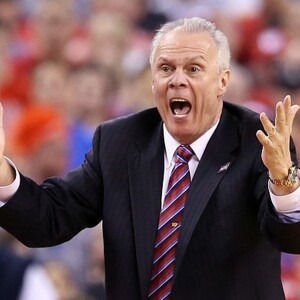