In 1966, Snyder accepted a graduate assistant position with the University of Southern California before returning to coach various high schools. He became the offensive coordinator at Austin, then an assistant at North Texas, before returning to the offensive coordinator role, this time for the University of Iowa Hawkeyes. In 1989, Snyder accepted the head coaching job at Kansas State University. He held the job until 2005, when he left for three years, before being rehired in 2009. As of 2014, Snyder remains at the helm of Kansas State's program. He has a 186-92-1 record as a head coach to date with a 7-8 record in bowl games. Snyder has won two Big 12 championships and four Big 12 North Division titles. He is a three-time Big Eight Conference Coach of the Year and a four-time Big 12 Coach of the Year. In 1998, he earned the Paul Bear Bryant Award and was named AP Coach of the Year. Snyder is heavily involved in fundraising for Kansas State. He has five children with his wife, Sharon, and close to a dozen grandchildren. 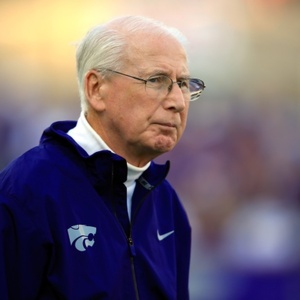