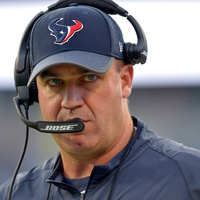 Bill O'Brien Net Worth and salary: Bill O'Brien is an American professional football coach who has a net worth of $7 million. Bill O'Brien was born in Dorchester, Massachusetts in October 1969. He played defensive end and linebacker for Brown University where he started his coaching career as tight ends coach in 1993 and inside linebackers coach in 1994. O'Brien moved to Georgia Tech where he served as a graduate assistant from 1995 to 1997, running backs coach from 1998 to 2000, and offensive coordinator and quarterbacks coach from 2001 to 2002. From 2003 to 2004 he worked as running backs coach at Maryland and then was offensive coordinator and quarterbacks coach for Duke from 2005 to 2007. In 2007 O'Brien joined the NFL's New England Patriots where he would be an assistant, wide receivers coach, quarterbacks coach, and offensive coordinator. In 2012 he took over for Joe Paterno as head coach at Penn State. O'Brien became head coach of the Houston Texans in 2014. In 2012 he received the Paul "Bear" Bryant Award, Big Ten Coach of the Year, Maxwell Coach of the Year, and AT&T-ESPN Coach of the Year.