Ben Howland Net Worth and salary: Ben Howland is an American college basketball coach who has a net worth of $11 million dollars. Born in Lebanon, Oregon, in 1957, Ben Howland earned a bachelor's degree from Weber State College and a Master's in education from Gonzaga. He played basketball for Weber State from 1978 until 1980, earning the team's defensive MVP honors twice.

The Wildcats appeared in the NCAA Tournament in 1979 and 1980. After graduation, Howland played professional basketball in Uruguay before landing a graduate assistant role at Gonzaga and later UC-Santa Barbara. In 1994, Howland scored his first head-coaching job at Northern Arizona University, where he stayed until 1999 when he left for Pittsburgh. In 2003, Howland was offered a job coaching UCLA. While with the Bruins, Howland won three regular season Pac-10 championships and one regular season Pac-12 title. He is a two-time Pac-10 Tournament Champion and guided the Bruins to three consecutive Final Four appearances from 2006 to 2008, one of just three active coaches to do so. Between 2008 and 2012, at least eleven players quit the UCLA program. In early 2012, a "Sports Illustrated" article featured UCLA player Reeves Nelson, accusing Nelson of bullying and intentionally attempting to hurt his teammates. The article alleged that Howland knew of Nelson's behavior and did nothing to stop it; he was fired in March of 2013, leaving UCLA with a .685 winning percentage after ten seasons. More than a dozen of his players have turned pro after being coached by Howland, including Kevin Love, Arron Afflalo, Russell Westbrook and Shabazz Muhammad. In 2016, his career at Northern Arizona University was rewarded with yet another special honor – he was inducted into the Northern Arizona University Athletics Hall of Fame as part of its class of 2016, 12 years after the team he coached during the 1997-98 season itself was also inducted into the same collection of NAU honorees. 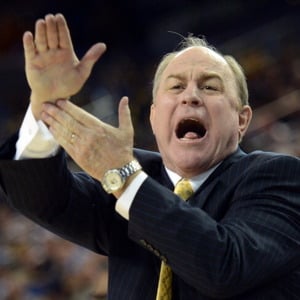