She was voted South Dakota Player of the Year as a senior and averaged 26 points a game. Becky attended Colorado State University and she was named Colorado Sportswoman of the Year. She was named WAC Mountain division player of the year and became the WAC's all-time leading scorer. As a senior she won the Frances Pomeroy Naismith Award. She was inducted into the Colorado State University Sports Hall of Fame in 2004 and in 2005 her #25 jersey was retired. She was not drafted but signed with the New York Liberty in 1999. During her WNBA career she played with the Liberty from 1999 to 2006 and with the San Antonio Stars from 2007 to 2014. She was a six time WNBA All-Star, two time All-WNBA First Team, and two time All-WNBA Second Team. Hammon has been voted one of the Top 15 WNBA Players of All Time. She won the NWBL Championship with the Colorado Chill in 2005 and 2006 and the World League Championship with CSKA in 2007. She won a Gold medal competing for the United States in the Jones Cup in 1998 and a Bronze medal for Russia in the 2008 Beijing Olympics after becoming a naturalized Russian citizen. She announced that she will retire following the 2014 WNBA season. In August 2014 Hammon became an assistant coach for the NBA's San Antonio Spurs, becoming the first full-time female coach in any of the four major professional sports leagues in the U.S. 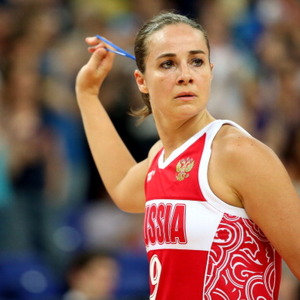