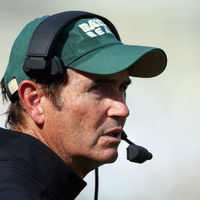 Art Briles Net Worth and salary: Art Briles is an American college football coach and former player who has a net worth of $11 million. Art Briles was born in Rule, Texas, in 1955, and played college football close to home at the University of Houston as a wide receiver from 1974 until 1977. He later transferred to Texas Tech University, where he earned his bachelor's degree, and studied at Abilene Christian University, earning his master's in education. Briles' coaching career began at Sundown High School in Texas as an assistant in 1979. He coached at various Texas high schools until Texas Tech hired him as the team's running backs coach from 2000 until 2002. In 2003, Houston hired Briles to be their head coach, a position he held until 2007. Ahead of the start of the 2008 season, Baylor tapped Briles to become their next head coach. As of 2014, Briles remains at the helm of the Bears. He has an 87-61 career win-loss record as a head coach in college and a 166-46-4 record as a head coach in high school. He is 2-5 all-time in bowl games. Briles has won one Conference USA championship in his career in 2006 and two C-USA West Division titles. He led Baylor to a Big 12 championship in 2013. Briles is the author of "Beating Goliath: My Story of Football and Faith," which hit bookshelves in 2014.