What is Andy Reid's Net Worth and Salary?

Andy Reid is an American professional football coach who has a net worth of $30 million. As of this writing, Andy Reid's annual salary with the Kansas City Chiefs is $7.5 million. Andy Reid is an American football coach who serves as the head coach of the NFL's Kansas City Chiefs. Previously, he was an assistant coach for the Green Bay Packers and the head coach of the Philadelphia Eagles. Among his many notable accomplishments, Reid has led his teams to numerous division titles, championship games, and Super Bowl appearances. Andy Reid is the longest-tenured Head Coach for an NFL team.

In 2017 Andy Reid signed a 5-year contract that ultimately could have been worth over $40 million with various milestones and bonuses. That made him the 5th highest-paid coach in the league at the time of signing.

Andy Reid was born on March 19, 1958 in Los Angeles, California. As a teen, he went to John Marshall High School, played youth sports at the Lemon Grove Recreation Center, and worked as a vendor at Dodger Stadium. Reid also appeared live on "Monday Night Football" for the Punt, Pass, and Kick competition. For his higher education, he attended Glendale Community College, and then Brigham Young University. At both institutions, he played football as an offensive tackle.

Following his graduation from BYU in 1981, Reid spent a year as a graduate assistant with that school's football coaching staff. He went on to become an offensive line coach at four different colleges over the next nine years, including at Northern Arizona University. In 1992, Reid finally entered the NFL as an assistant coach for the Green Bay Packers. Three years later, he became assistant offensive line and tight ends coach. In 1996, Reid had his greatest professional success yet as he helped lead the Packers to victory over the New England Patriots in Super Bowl XXXI. Following this, he became the team's quarterbacks coach.

Thanks to his successful tenure with the Packers, Reid landed his first head coaching position in 1999 with the Philadelphia Eagles. In the process, he became the second-youngest head coach in the league and the first to be hired without having coordinator experience. Although the hiring was criticized by many, Reid soon went on to prove his worth. After posting a 5-11 season record in 1999, the Eagles improved to 11-5 in 2000, and won their first playoff game in five years. The next season, Reid led the Eagles to the first of four consecutive Eastern Division titles, the longest streak in the history of the franchise. Moreover, he led the team to four consecutive conference championship games. In the last of those games in 2004, the Eagles defeated the Atlanta Falcons to advance to Super Bowl XXXIX. There, they ultimately fell to the Patriots.

Reid had a rougher season than usual in 2005; that year, he was forced to contend with the rambunctiousness of wide receiver Terrell Owens and the season-ending injury of quarterback Donovan McNabb. The Eagles ended up finishing the season with a 6-10 record. Reid and the team bounced back in memorable fashion in 2006, posting wins against numerous division rivals and winning the NFC East title. In 2007, the Eagles had a more mediocre season with an 8-8 record. 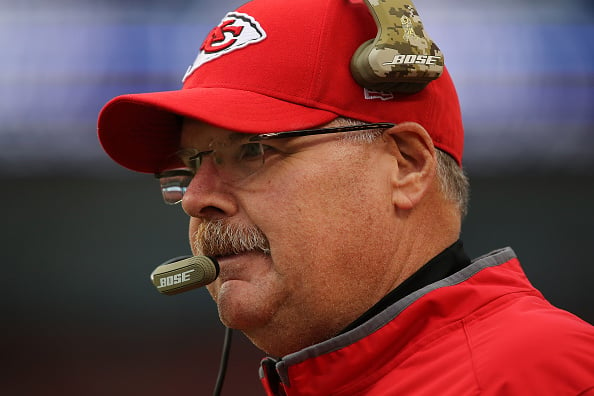 Reid led the Eagles to a fifth NFC championship game in 2008; ultimately, the team lost the game to the Arizona Cardinals. The following season, the Eagles posted an 11-5 record before being eliminated in the Wild Card Round by the Dallas Cowboys. The team fell once again in the Wild Card Round in 2010, this time to the Packers. In 2011, the Eagles failed to make it to the postseason with an 8-8 record. Reid had his worst coaching year yet the next season as the Eagles crawled to a 4-12 record. On New Year's Eve in 2012, it was announced that he would be released as head coach. Over the course of his 14-year tenure with the team, Reid posted the best win total, winning percentage, and playoff victory total in Eagles franchise history.

In early 2013, Reid agreed to a five-year contract to become head coach of the Kansas City Chiefs. His success with the team was augured early; in his very first game as head coach, the Chiefs defeated the Jacksonville Jaguars 28-2, the widest margin of victory for the team on opening day since 1963. Reid went on to lead the Chiefs to a starting record of 9-0 before finishing the regular season 11-5. The 2014 season was less great, as the team finished with a 9-7 record and failed to make it to the playoffs. The Chiefs came back strong the next season, as Reid led the team to their first playoff win since 1993. More success came in 2016, with the team posting a 12-4 record and clinching their division. The Chiefs clinched their division again in 2017 before falling to the Tennessee Titans in the Wild Card Round.

The 2018 season was a highlight for Reid, as the Chiefs finished the regular season as the top seed in the AFC, and also clinched their third consecutive division title. The team went on to host the AFC Championship for the first time in their history; ultimately, they lost to the Patriots. Significantly, it was during the 2018 season that Reid notched his 200th career win, making him one of only a handful of NFL coaches to accomplish that feat. In 2019, the Chiefs once again won their division, and hosted the AFC Championship for the second straight year. The team advanced to Super Bowl IV, defeating the San Francisco 49ers to clinch their first Super Bowl title in 50 years. The Chiefs made it back to the Super Bowl the next year, this time losing to the Tampa Bay Buccaneers.

Andy and his wife Tammy have been married since 1981. They had five children together. Tragically, their eldest son Garrett died from an accidental drug overdose in August 2012. Their son Britt is also a coach with the Chiefs. The family belongs to the Church of Jesus Christ of Latter-day Saints. 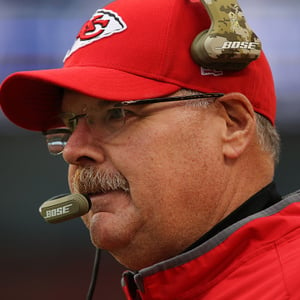