Andy Enfield net worth and salary: Andy Enfield is an American basketball coach who has a net worth of $10 million dollars. Andy Enfield was born in Pennsylvania, and was the valedictorian of his high school class. He went on to Johns Hopkins and set the school's scoring record. He was also both a Division III Academic All-American and Athletic All-American.

He earned his degree in Economics, and then completed an MBA at the University of Maryland. He began his coaching career by hiring himself out as a shooting consultant, while completing his MBA. This led to assistant coaching positions for the Milwaukee Bucks, the Boston Celtics, and Florida State University. In 2011, he became the Head Coach for Florida Gulf Coast University. The team went on to become the first 15 seed to reach the Sweet Sixteen. In April of 2013, he became the new Head Coach for the University of Southern California after the Los Angeles based school offered him a 10x salary raise from $150,000 per year to $.4 million. Prior to coaching at FGCU, Andy Enfield helped launch a healthcare technology firm called TractManager that has been valued at more than $100 million. Enfield still owns a stake in the company that is worth millions of dollars. Enfield is married to Maxim magazine model Amanda Marcum. The couple met on a road trip and now share three children. 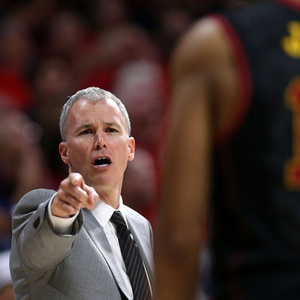