Alex Honnold Net Worth: Alex Honnold is an American professional rock climber who has a net worth of $2 million. He is best known for being the only person to successfully free solo climb El Capitan and is often named as one of the best rock climbers in the world.

Early Life: Alex Honnold was born on August 17th, 1985 in Sacramento, California. Both of his parents worked as community college professors. He is of German ancestry on his father's side and of Polish on his mother's side of the family. He began rock climbing at a gym by the age of five and displayed his commitment to the sport by the age of ten when he was going to the gym several times a week. While he was a teenager, he competed in various rock climbing competitions and won often. He went to Mira Loma High School, and after graduating in 2003, he enrolled at University of California, Berkley to study civil engineering. His first year of college was challenging for him. Instead of living in the dorms, he rented an apartment from a family friend, which led to him not making many friends. In addition to being isolated his freshman year, his parents were going through a divorce and his grandmother died. He frequently skipped classes, and after taking a semester off to train for the National Climbing Championships in Scotland, he did not return to college. After leaving school, he spent time traveling around California in his mother's minivan and climbing. Once the minivan broke down, he used a bicycle for transportation and camped in a tent. He has stated that he lived off of less than $1,000 a month from the year 2004 to 2009.

Climbing Career: Although he had been climbing in competitions for most of his life, he remained relatively unknown even in the climbing community until around 2007. In that year, he free soloed Yosemite Valley's Astroman and Rostrum in a single day, which was a feat only matched by climber Peter Croft in 1987. It was only after this accomplishment that he gained more widespread recognition in the climbing community. The next year he free soloed a 1,200-foot-tall finger crack that splits Zion's Moonlight Buttress, and when this achievement was reported, many thought it was a joke due to the incredible challenge of the climb as well as the timing of the news being April 1st. Later in 2008, Honnold free soloed the 2,000 foot tall Regular Northwest Face of Half Dome in Yosemite, and in 2012, he went on to set a new record for fastest ascent at one hour and twenty-two minutes. By 2009, he had achieved a degree of fame in the climbing community and a three-year contract, but he remained relatively unknown to the public at large. In 2010, he received a Golden Piton Award for endurance rock climbing.

In 2011, he was known as one of the most skilled free solo rock climbers in the world, and he was beginning to receive more recognition outside of the climbing community. In May of 2011, he was featured on the cover of National Geographic, and in the winter of that year, he attempted to beat the record for fastest climb of El Capitan but missed the mark by just 45 seconds. In 2012, he gained mainstream recognition after appearing on "60 minutes" to talk about his free solo climb of the Regular Northwest Face of Half Dome, and he was featured in the documentary climbing film "Alone on the Wall." In June of that year, he with fellow climber Hans Florine again attempted to break the record for fastest ascent of El Capitan, and they were successful, setting a new record of 2 hours, 23 minutes, and 46 seconds. In 2014, Honnold and several other climbers were featured a documentary about the evolution of rock climbing in Yosemite Park titled "Valley Uprising," and Cliff Bar was one of the films financial sponsors and also had sponsorship deals with five of those in the film, including Honnold. However, a couple months after the film was released, Cliff Bar withdrew sponsorship deals with the professional climbers that had been featured. They stated that they chose to do so because the company wasn't comfortable with how far the climbers were pushing the boundaries in the sport and over concerns that they were taking unnecessary risks. Honnold is widely recognized as one who takes incredible risks with a somewhat nonchalant attitude for his own life and safety.

On June 3rd of 2017, Honnold made the first free solo ascent of El Capitan and took the 2,900-foot Freerider route. He completed the climb in 3 hours and 56 minutes, and his accomplishment has been described as one of the most impressive athletic feats ever. It was documented by climber and photographer Jimmy Chin as well as his wife documentary filmmaker Elizabeth Chai Vasarhelyi, and they released the documentary film "Free Solo" in 2018. It won an Academy Award for Best Documentary Feature that year.

Personal Life: In 2015, Honnold met Sanndi McCandless at a book signing, and the two began engaged in late 2019. They married in September of 2020. Their relationship was one of the focal points of the documentary "Free Solo." In 2012, he began giving a third of his income away to fund solar projects to increase energy availability worldwide. He expanded this into the nonprofit the Honnold Foundation, which promotes and supports the use solar energy in developing nations. Honnold's mother, Dierdre Wolownick, climbed El Capitan at age sixty-six, making her the oldest woman to have completed the climb. 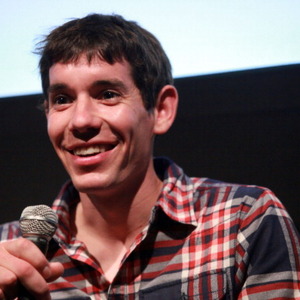