Tony Thompson (Boxer) Net Worth: Tony Thompson is an American professional boxer who has a net worth of $2 million. Tony Thompson was born in Washington, D.C., in 1971, and made his professional boxing debut in 2000, defeating fellow American DeShaun Harper in January. He won his first four fights before losing to Eric Kirkland during the summer of the same year. It was the only loss Thompson would experience until 2008 when he lost for the second time at the hands of WBO Champion Wladimir Klitschko. Thompson won his next five fights before facing off against Klitschko for the second time, losing again in the summer of 2012. He twice defeated David Price in 2013 before losing to Kubrat Pulev, a result that cast doubt on his future boxing career prospects. Thompson bounced back with a win against Odlanier Solis in March of 2014 before dropping his next fight to Carlos Takan in June of the same year. Over the course of his career, Thompson has appeared in 44 fights, amassing a 39-5 record. He has won 26 of his fights by knock out. The six-foot-five heavyweight fighter in a southpaw, who has yet to win a heavyweight championship as of the summer of 2014. 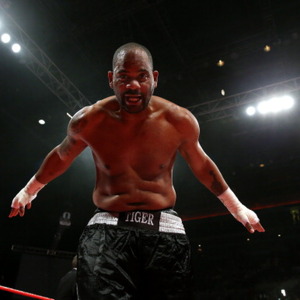