Tommy Morrison Net Worth: Tommy Morrison was an American heavyweight boxer and a former World Boxing Organization champion who had a net worth of $10 thousand. Born Tommy David Morrison (January 2, 1969 – September 1, 2013) in Gravette, Arkansas, he is a true legend having lost only three out of a total of 52 professional fights. Dubbed the Duke, because he claimed to be a grandnephew of Hollywood star John Wayne, Morrison is also remembered for his acting role in Rocky V. He was only 13 years old when he used a fake ID to enter fifteen "toughman" contests (the minimum age for contestants was 21), in which he claimed to have lost one out of 50 fights. As an amateur boxer, Morrison won the Kansas City Golden Gloves and claimed an amateur record of 222-20. In November of 1988, he turned pro starting his career with a first-round knockout of William Muhammad in New York City. Early in his professional career (while he still had no losses), Morrison appeared next to Sylvester Stallone in the 1990 movie Rocky V, playing Rocky Balboa protege Tommy Gunn. Morrison suffered his first loss in 1991 in a bout against fellow undefeated fighter Ray Mercer, who knocked him out in the fifth round and won the WBO title. Two years later, Morrison found himself fighting for the WBO title again, this time against heavyweight boxing legend George Foreman. Even though both men were famed for their punching power, Morrison was the one to win the closely contested bout and the WBO title. The same year, in October 1993, Morrison lost the title to Michael Bentt in a big upset by a first-round knockout. His third loss came in 1995 in a fight against WBC champion Lennox Lewis. Morrison was forced to retire in 1996 as he was tested HIV-positive. However, he did stop Marcus Rhode in two rounds in Japan, where there were no rules prohibiting an HIV-positive boxer from fighting. Since then, he got the chance to win to more fights, one in 2007 and one in 2008. Next, followed another tough episode in Morrison's life filled with multiple convictions for driving under the influence, assault, and drugs and weapons charges. Spending over a year bedridden, Morrison died on September 1, 2013, at a hospital in Omaha, Nebraska. 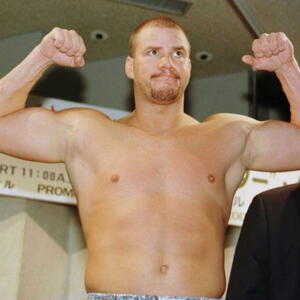